For companies looking for entertaining methods for team building and employee appreciation, THEY improv provides a variety of fun approaches for murder mystery dinners in Ventura County for a variety of groups and gatherings.

Hire THEY improv for a customized show just for you. Yes, the perfect way to enhance any VC corporate event, banquet or private party is a customized Ventura County Murder Mystery dinner show written just for the group and venue involved.

Actors from THEY improv come together and set up a Ventura County murder mystery in Simi Valley, Oxnard, Ojai, Thousand Oaks, Camarillo, San Buenaventura, Agoura Hills or anywhere else. Interacting directly with the participants of the private party or corporate event, attendees help examine clues, evaluate witnesses and alibis, choose from a variety of suspects and determine the culprit.

Likewise, the scripts can be adjusted to bring your audience members under suspicion. They can be interrogated and engaged in a roast type of environment. They can be found innocent by the audience with them getting applause. If you prefer, we can keep them as key suspects by using information known about their past to dig them deeper into the private Ventura County murder mystery dinner.

We also have ambush scenarios where your group doesn't realize that they're part of a show. They're confronted by strange situations and their reactions become part of the show.

Because every private party or corporate event is custom designed you have to contact THEY improv directly to receive a quote. We'll talk to you about the size of the group, the venue, any particular needs you have and come up with a variety of ideas and a proposal for you. 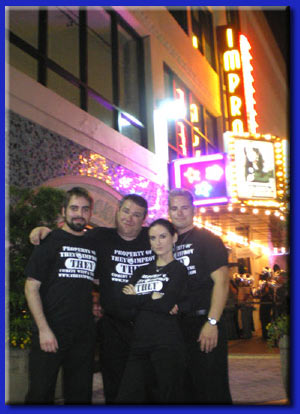 Wherever you are in Ventura County including Thousand Oaks, Camarillo, Simi Valley, Ojai, Oxnard, Conejo Valley, Port Hueneme, Fillmore, Westlake Village, Point Mugu or San Buenaventura, THEY improv is ready to perform for your gathering. And for Santa Barbara, Malibu, the Valley, Los Angeles or anywhere else in Southern California, THEY improv is also prepared to help you there!

Contact us today to find out more about how THEY improv can help your business. Email info@theyimprov.com or call our offices at (213) 867-1795.