The industry standard, the Straight Murder Mystery, is what you normally would think of. A group of actors get together, create all those crazy moments at a party that never really happen and lead up to a dead body. A detective then leads the audience through solving the crime in a comedic evening.

These have proven great for client and employee appreciation, holiday gatherings and meetings and incentives awards programs. 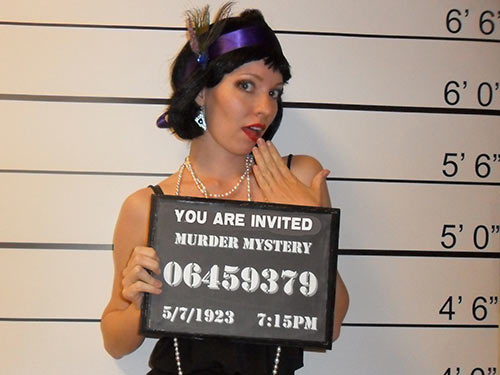 The Straight Murder Mystery is the industry standard for corporate events and private parties. A group of actors interacts with your audience starting during cocktails. During that time they're making people laugh while also getting out an understanding of who the characters are.

During dinner, our characters increase the activity. This includes interactions at the tables, arguments that walk around the room, and some moments in front of the audience as a whole. This lets the audience start to understand the relationships, the problems between the characters and what may prove to be the motivation for a murder.

This leads to a murder that occurs at the beginning of dessert. We rarely have gunshots as we don't want to risk a heart attack among the audience. This then leads to a comedy routine where our comedic detective takes over and interrogates audience members about what they saw. Often the detective is played by the same actor that played the victim.

After getting basic information out through the interrogations, the suspects mingle with the audience and work as teams to solve the crime. This could also be done with individuals providing solutions or could be solved on-stage to speed the process for larger groups. The winners receive small prizes so as to not greatly upset those that came close but didn't win.

A customized corporate event, banquet or private party murder mystery dinner show written just for your employees or clients and the venue is a perfect way to have quality entertainment that has audiences laughing. These are perfect to entertain the employees or for holiday parties, weddings, family gatherings, season kick-offs, banquets, dinners or charity fundraising!

These shows can be provided not only in the evening, but also make a great idea for a lunch or at other times during the day that might not even be around a meal. Let us discuss various ideas that can work for you. Because every performance is custom designed you have to contact us directly to receive a quote for your straight murder mystery dinner party.

Scenarios: - We have a collection of great themes that can fit most any occasion. Additionally, we can create just about any scenario that you can think of, and often at no additional cost. The costs do rise when additional costumes, more actors or travel is required.

Murder of the Millionaire - One of the more standard scenarios, this involves a millionaire who made his wealth on the backs of many others. This is a celebration were he is making an announcement about the future of his business and those potentially effected are not happy. This likely includes a spouse, a girlfriend, a business partner, a yes-man, a competitor and a politician. By changing characters and changing the origin of his fortune we can quickly customize a scenario just for your group.

The Meeting of the Family - This mobster themed show involves the head of the local family. Taking on the personality of your city, the show quickly customizes to the audience involved. Suspects usually include a spouse, a Consigliari, a rival mobster and a politician in the pocket of the mob.

Death of the Alderman - This 1920's themed party involves the election of an Alderman to the local city council. The party is a celebration of his victory and those in attendance are his supporters dressed as flappers and mobsters. This includes the North Side Mob, the South Side Mob, his spouse, political figures and temperance workers. It's a great time had by all and we can add a costume contest as well.

The Movie Mogul - This 1940's Hollywood themed party involves the celebration of a movie mogul. The various pseudo famous actors, actresses, writers and directors suffer at the whims of the mogul and one of them has gotten their revenge. While originally performed as being in the 1940s, this can also be conducted in any other era.

Song of Death - This 1980's rock themed party involves the latest charity anthem and a murdered record producer. The various rock stars and affiliated person are the suspects as more and more is revealed about their relationships to the victim.

Additional Scenarios by Request - We have performed practically every thing you can think of and can create new ones as needed. If you have a themed party and would like to see if we can provide a show that will fit, simply ask. There is never an obligation until we get a signed contract.