For companies looking for entertaining methods for team building and employee appreciation, we provide a distinctive approach using stand-up comedy for murder mystery dinners for a variety of groups and gatherings. Our professional stand-up comedians create a murder mystery on the spot using your audience as the suspects, witnesses and jury! This is show utilizing crowd work to create something custom-tailored to the audience. 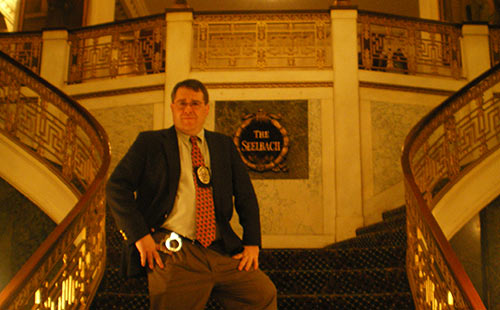 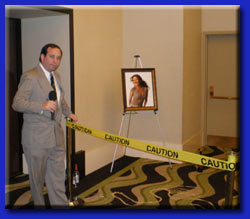 THEY improv works with a lot of venues and different sized groups of audiences. Some of these know each other, such as within a company or at a country club, and some are more for the general public, like a restaurant.

For each of these, having comedians who directly interact with members of the audience has proven to be a favorite.

Into this environment, THEY improv presents The Frick & Frack Show! For this kind of show, THEY improv first introduces the idea that the audience members will be directly spoken to. We expect them to accept any facts that we present to them, such as who they are, that they're in the mob, etc. If we ask details, they can provide any details that they like. The audience then leads the performers on a journey trying to piece together the details of the show.

By reducing the cast to just one or two, we are able to bring the cost down slightly. It doesn't get cut in half because the performers have to be more experienced, but it can mean the difference between choosing a show and going without.

During the course of the investigation, we'll identify various suspects, have others as witnesses that will throw people under the bus, and still others will be interrogated as to their involvement. Towards the end, we bring the main suspects up and ask the audience to determine the murderer. Sometimes we reward the most accurate table, sometimes the prizes just go to the suspects. Regardless, the emphasis is on having a great time.

As this is a largely improvised show, we can literally use any theme that you can imagine. Generally the suspects are romantic, power or financial in nature.

The event usually runs the full course of dinner, from salad through dessert, but can be scheduled to operate in other ways. Contact THEY improv for more information on how the Frick & Frack Show can be the perfect corporate or private murder mystery for your team building, or for public shows as a charity fundraiser or restaurant entertainment.

While we improvise most of the show based on the audience and their reactions, we can theme the night any way you wish. This means we can create literally any scenario. Most of our clients, though, go with a more standard scenario such as the ones we use for our other shows. This includes mobsters, millionaires, the 80's, the 20's and just about any thing else you can think of.

Every event is completely customized, so don't be afraid to make a request.

Contact THEY improv to find out the variety of shows available and how hiring THEY improv is a winning proposition for everyone. Email THEY improv at info@THEYimprov.com or call (866) 219-4386.