For companies looking for entertaining methods for team building and employee appreciation, THEY improv provides a variety of fun approaches for murder mystery dinners in Boston for a variety of groups and gatherings.

Hire THEY improv for a customized show just for you. Yes, the perfect way to enhance any corporate event or private party is a customized Boston murder mystery dinner show or lunch written just for the group and venue involved.

Actors from THEY improv come together and set up a Boston murder mystery dinner or luncheon that the audience helps to solve. With a cast of crazy characters performed by some of New England's top improvisational talent interacting directly with the participants of the event, attendees help examine clues, evaluate witnesses and alibis, choose from a variety of suspects and determine the culprit while enjoying New England's top interactive comedy experience. 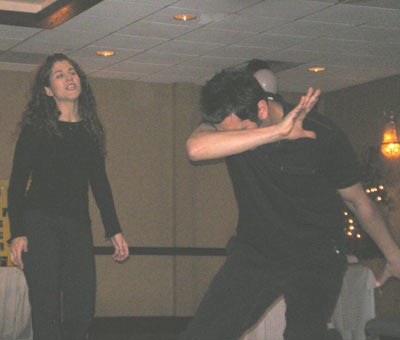 Often performed as a Boston murder mystery dinner, the story unfolds as the audience enjoys top catered food at quality banquet halls throughout New England. THEY improv comes to your venue and tailors the event to you. Taking in the environment, attendees and current events, the plot is worked to perfection and even adjusted as the evening progresses.

Likewise, the scripts can be adjusted to bring your audience members under suspicion. They can be interrogated and engaged in a roast type of environment. They can be found innocent by the audience with them getting applause. If you prefer, we can keep them as key suspects by using information known about their past to dig them deeper into the Boston murder mystery.

We are proud to serve all over the city including the Financial District, Beacon Hill, Back Bay, Copley Square, Fenway - Kenmore, Brighton, Mission Hill, Charlestown, Jamaica Plain, Southie, Dorchester, Chestnut Hill, Government Center, Downtown Crossing, the Common, Brookline, the Seaport District, the North End and the rest of the area. From the North Shore to the South Shore, MetroWest to Cambridge, THEY improv is ready for your needs.