THEY improv provides a variety of entertainment options that can be done around a dinner, a lunch or simply as a stand-alone to provide laughter and team building throughout Northern California while the participants will likely just think that their having a good time. All of this is done while having participants not realizing the morale and group benefits being imparted.

THEY improv leads the way for corporate event, banquet and private party entertainment with their San Francisco game shows. These shows are designed to entertain and to produce positive results. Participants in the games have a lot of fun while lowering their personal barriers and increase their ability to participate in personal relationships. 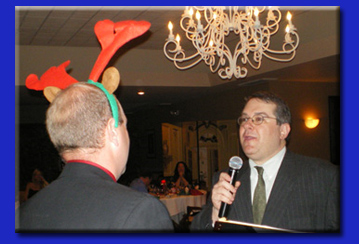 Each San Francisco game show is individualized with elements adjusted based on the needs of the audience. This includes shifting from ratings G through NC-17, wholly audience driven to packing participants with comedic performers, and from innocuous shows to shows that ambush unwitting audience members.

Most San Francisco game shows are provided as a low-tech adventure which allows us to focus on the people rather than the equipment and gives us more flexibility to adjust to the audience members as well as to fit into any venue. Additional set elements, equipment, scoreboards, etc. are available at an increased cost. Besides the host, a Vanna is available at an increased fee, and is recommended for shows with larger audiences. Travel costs will also be added to any quote. 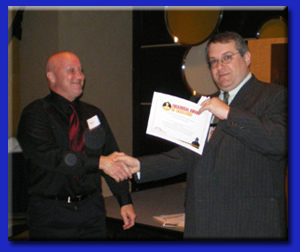 San Francisco game shows come in ranges of 30, 45, 60, and 90 minutes including a variety of options, approaches and playoff versions. Prices range due to the high level of customization to your group, so you should contact THEY improv for a free consultation about your needs and to get you a quote.

Contact THEY improv to find out the variety of San Francisco game shows available and how hiring THEY improv is a winning proposition for everyone.

Our Game Shows include:
The Functional Feud:Loosely based on television's popular Family Feud, the Functional Feud has competitors competing to come up with complete lists from popular knowledge. From naming the seven dwarfs to the seven deadly sins, common knowledge is challenged for points and bragging rights in this battle of wits.
Learn more on our Functional Feud Page.

The NewlyMet Game: Loosely based on television's popular the Newlywed Game, the NewlyMet Game pairs contestants off to prove that they know more about each other than the other pairs. Audience members serve as the judges with bizarre and fun ways to show incorrect answers. Often entertaining and amusing, this brings knowledge of each other to a new level and enhances personal relationships in a fun and supportive atmosphere.
Learn more on our Newly Met Game Page.

Match Me If You Can: Loosely based on television's popular Match Game, Match Me If You Can pits two contestants against one another trying to match answers with a panel of six audience members. Other audience members serve as judges with group fun at incorrect answers. This game improves the group mind of a team and helps people to see things through each other's eyes.
Learn more on our Match Me Page.

Timed Tirades: Loosely based on television's popular Minute To Win It or Beat the Clock, THEY improv's Timed Tirades pit contestants against each other in big goofy activities. With dozens of options for contests, with everything from human horseshoes to hopping, there's something for any group. One of our most popular options, you should contact us today to find out how we can increase employee bonding through these fun activities. Because it reinvents itself and changes the contestants, this can be used for a slightly larger group range (20-75).
Learn more on our Timed Tirades Page. 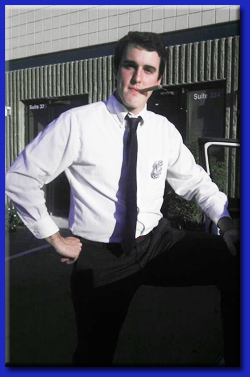 Murder Mystery Mayhem: This is a custom-built murder mystery party for your group with a THEY improv professional facilitating the evening and making sure that everyone has a good time. With our emcee watching over your group, the attendees are pitted against one of their own, a murderer, who works to get away with murder! If someone solves the crime, the murderer is found and the super sleuth gets a prize. If the murderer gets away with it, he or she gets the prize instead! Additionally, a prize is given to the best actor/actress in your group. A great game for smaller groups (15-40) that are looking for unique entertainment.
Learn more on our Murder Mystery Mayhem Page.

Trivia is not Trivial: Designed for larger groups, the audience is divided into teams, usually by table. The teams are provided with the upcoming categories of questions. They talk amongst themselves and determine their confidence for each category. Then, as questions are asked, the teams compete against each other to win a trivia quiz without the benefit of technology. This bonds team mates, has friendly competition and can be done throughout a meal leading to a more lengthy shows. While most are 30-45 minutes, this can run for 90 minutes or so. A great game for slightly larger groups (50-150 or more).
Learn more on our Trivia Games Page.

Audience Olympiad: Having more people participate and maintaining their attention can be an issue for larger groups. To address this, we developed the Audience Olympiad. We divide the audience into teams with each choosing participants to represent them in each activity. Scores are then aggregated together for a total result rather than game by game. Everyone on the team wins prizes whether or not they physically participated or not. This means that they're more likely to maintain their attention to cheer their team on to victory. This is the only game show that we generally do not provide the prizes as the teams can get quite large. We can bring the prizes for a negotiated additional charge.
Learn more on our Audience Olympiad Page.

Getting To Know You: Designed as a team building effort, the audience is divided into several groups. Each group is provided with a period of time to talk to each other. They are expected to learn pertinent details about each other and to get to know each others' personality. One person from each group is brought up in front of the audience. They are each provided with a white board to write answers. The person from each group is asked questions about themselves. Their group then tries to match those answers. It is a great way for people to get to know each other better and learn things about one another. A great game for slightly larger groups (70-150).

So You've Got Talent: We have a variety of formats designed to bring out the unsung talent of your group. Whether singing, dancing, acting, comedy, writing, skills of dexterity or human oddities, there's a format to push the boundaries and to get your coworkers, friends or family to bond as never before. Our facilitators can assist or simply provide the framework for your people to become stars. To learn more about these, please see our Talent Page by clicking here. There are versions for just about any sized group (10-150) or for smaller groups (10-30) to perform in front of major audiences ranging in size into the many 100s.

What's the Deal?: For larger groups, maintaining the interest of the audience can be key. Similar to the Let's Make a Deal TV show, our What's the Deal, our Emcees wander the audience challenging audience members to trade options to win a variety of prizes. The big winners from the audience are then brought on stage to make deals with one another or to trade for potential larger prizes. This is also a fun way to run a White Elephant event or other gift exchanges. Prices vary wildly based on whether we're providing the prizes and the expense involved with the prizes. Likewise, for larger audiences we might provide camera crews and projection for an additional fee.
Learn more on our What's the Deal Page.

THEY can help you find the success you need at a price you can afford!