For companies looking for entertaining methods for team building and employee appreciation, THEY improv provides a variety of fun approaches for murder mystery dinners in country clubs across the country for a variety of groups and gatherings.

Actors from THEY improv come together and set up a country club murder mystery dinner or lunch that the audience helps to solve. Interacting directly with the participants of the event, attendees help examine clues, evaluate witnesses and alibis, choose from a variety of suspects and determine the culprit.

Once THEY begin, your audience will meet and talk with the crazy cast of characters, witness a crime and then work to solve the crime, all without the CSI crime lab! Laugh along with our professional, but bizarre, crime solver, as audience members help him interrogate suspects and work his way through the winding maze of clues. This often makes audience members shine, which is perfect for meetings and incentives awards gatherings, leaving employees with a sense of being appreciated.

Likewise, the scripts can be adjusted to bring your audience members under suspicion. They can be interrogated and engaged in a roast type of environment. They can be found innocent by the audience with them getting applause. If you prefer, we can keep them as key suspects by using information known about their past to dig them deeper into the Country Club murder mystery.

Because every member event is custom designed you have to contact THEY improv directly to receive a quote for your country club murder mystery dinner party.

Mix and Mingle - we also have a special event for smaller groups providing the opportunity for people to find a murderer in their midst! This includes the Cambridge Solution where 4-10 of your people are characters and speak to everyone else at the gathering, or a Clue Party where everyone is provided a character and they talk to each other to determine the culprit. 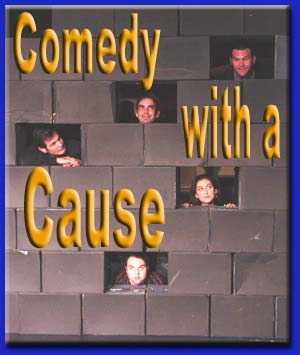 THEY improv performs many benefit shows for various charities and some of the top venues. For these shows, we refer to it as Justifiable Homicide. Learn more about our Comedy With a Cause program by clicking here.